A Love Through Generations 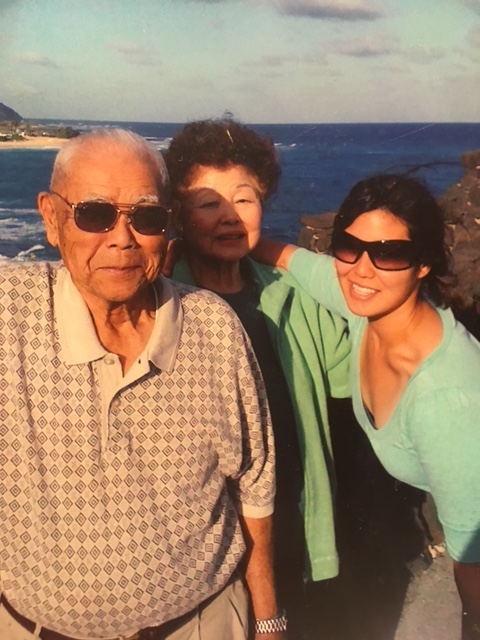 For my brother Daryl and I, life at home always felt comfortable and safe with the people who loved us the most. Both my parents and my grandma worked growing up. My grandma is one of the hardest working individuals I know, and still works six days a week at the San Gabriel Nursery and Florist. While she worked full-time running the nursery, our grandpa worked full-time taking care of us at home.

My grandpa really took on the role of the caregiver in our family. My mom worked graveyard shifts at Vons and my dad would leave for work at the same time we would leave for school, so a lot of the times, we would sleep at our grandparents’ house.

I remember waking up to the smell of bacon in the mornings. My grandpa didn't just serve us cereal for breakfast; instead, he would take the time to make us Japanese style fried rice, scrambled eggs and Portuguese sausage, eggs over rice. He would cut a grapefruit in half, add a little sugar on top, and we would eat out of each little segment. From there, he would take us to school every morning –– we did this same routine all the way through high school.

My grandpa Ichiro came from immigrant parents. He was born in Los Angeles in 1921, and when he was one year old, his family moved to Pasadena. My grandpa had four other siblings, so as you can imagine, money was tight growing up. When he was in elementary school, he worked at the Fuyuume grocery store, a local store in their neighborhood. When he was in high school, he worked at the farmer’s market in Pasadena. My grandpa always used to tell me that he didn't grow up like we did. He didn’t have the simple luxuries of our generation. He grew up poor, which is probably why he had to start working when he was only in elementary school. I can’t even fathom working at that young of age.

After graduating high school, our grandpa still worked at the farmers market until December 7,1941 –– a day that would change his life forever. In my grandpa’s words:

“As you know, Japan declared war by bombing Pearl Harbor on December 7,1941. I was 20 years old. It was a Sunday when news was broadcasted on radios everywhere (no TV). Instant feeling was one of bewilderment, especially being of Japanese ancestry and of guilt. Most of us wondered how is the American public going to feel about us? What is going to happen? Without a doubt, prejudice against minorities was much stronger then. The government in early 1942 issued an order that all Japanese on the West Coast (without exception) were to be evacuated to government camps. The reason being we were all suspects and posed a ‘danger to this nation’.

In our case, it was to a temporary camp in Tulare, CA and then to Gila, AZ. The camp in Gila, AZ was our permanent camp and was situated not too many miles south of Phoenix near the Gila River. We lost everything; all of our prized possessions such as our cars, our homes, our businesses, and our freedom. The camps themselves were not great, nor were they a place of horror. Many discomforts surely, as one barrack was divided into four rooms-with one room per family.

Approximately 20 barracks comprised a block. Each block had a manager, a kitchen with a mess hall, and of course a community bath and restroom. Dignity and privacy were a thing of the past. The whole experience of being in camp was very degrading, mostly because here we were American citizens being forced into camps because it was known that we might all be ‘spies’ for Japan. That feeling of going to sleep at night knowing that there were military police standing guard outside is something I will never forget.’”

He also wrote about the infamous loyalty questionnaire given out in the camps:

“…all males of draft age had to fill out a loyalty questionnaire which had two vital questions. The gist was a) Would you forsake allegiance to all other nations and be loyal to the United States? b) Will you bear arms and defend the United States? At first, I had mixed feelings to be asked to fight for a country who had classified us as 4-C ‘enemy aliens’ but of course I answered yes to defend the United States. In 1943, the government finally asked for volunteers from the various camps. These men with the 100th (Hawaiian) battalion formed the nucleus of the 442nd Regimental Combat team. A highly decorated Nisei unit they were, they all have my utmost respect to have volunteered under such difficult circumstances.’

Our grandpa lost his father in camp, who had contracted cancer of the pancreas and died in the camp hospital. In May of 1944, one month after his father passed away, his brother Tokuji (see Tokuji in our film here) was drafted in the United States Army, and in June my grandpa was drafted as well.

His brother Tok was in the 100th Battalion, and my grandpa was a part of the Cannon Company. He would always tell me how much he admired his brother for being in the front lines of battle in Europe. After the war was over, my grandpa graduated from Ohio State University and obtained his degree in Horticulture, where he was reacquainted with my grandma’s brother, Raymond.

Raymond suggested to my grandpa to start working in San Gabriel with his father. When he moved to San Gabriel, my grandpa met my grandma Maggie. They married on December 2, 1951.

‘During the 1950’s, with the help of Raymond and Ichiro, the nursery’s wholesale business started to expand. Seven greenhouses were constructed, and they started to sell a diverse selection of plants to nurseries and florists throughout Southern California.’ (taken off the San Gabriel Nursery ‘Our Company History’ Website).

From that day until his retirement, my grandpa worked hard at the nursery and has been missed by many since his passing. Both my brother and I have the utmost respect for our grandpa Ichiro.

As Daryl writes: ‘My grandpa would never demand respect but did so through his actions and is a man I am always aspiring to be.’

My brother just reached his ten year anniversary with the L.A. City Fire Department, and has recently made Fire Inspector. His self-discipline, along with his honest work ethic and sincere personality, reminds me so much of our grandpa. In fact, he credits him for instilling that in himself.

As for me, my fondest memory with my grandpa was our trip to Oahu for his Go For Broke Reunion. There, we had such a memorable time meeting up with the other members of the 442nd. The reunion was held at the Hilton Hawaiian, and I vividly remember my grandpa walking in with his unit. As he was walking down the aisle, I remember thinking how proud I was he was my grandpa. Senator Daniel Inouye was the guest speaker at the reunion, and it was definitely a night I will never forget.

My grandpa will always be with me, just like my dad is always there for my children. I love watching both my children, Kelsey and Shane, play with my dad, Papa Ben. To see how much love and respect they already have for him just reminds me of how much love and respect I had for my grandpa when I was little. I will always appreciate the hard work and sacrifices my grandfather made for us. The stability and safety that was provided for us is now making a better life for my children. Although he is no longer with us and my children will never meet him, the love he had for us was greater than just me, and endures beyond his life span to his great-grandchildren, and generations of our family to come.

Tracy Alexander is a 4th Generation Japanese American who graduated with her B.A. in Early Childhood Education from Cal State University Channel Islands. She is currently a full time mom of two with one on the way. Her husband Brandy currently owns his own landscaping company Arbor Vitae Landscapes and she helps him on her spare time.