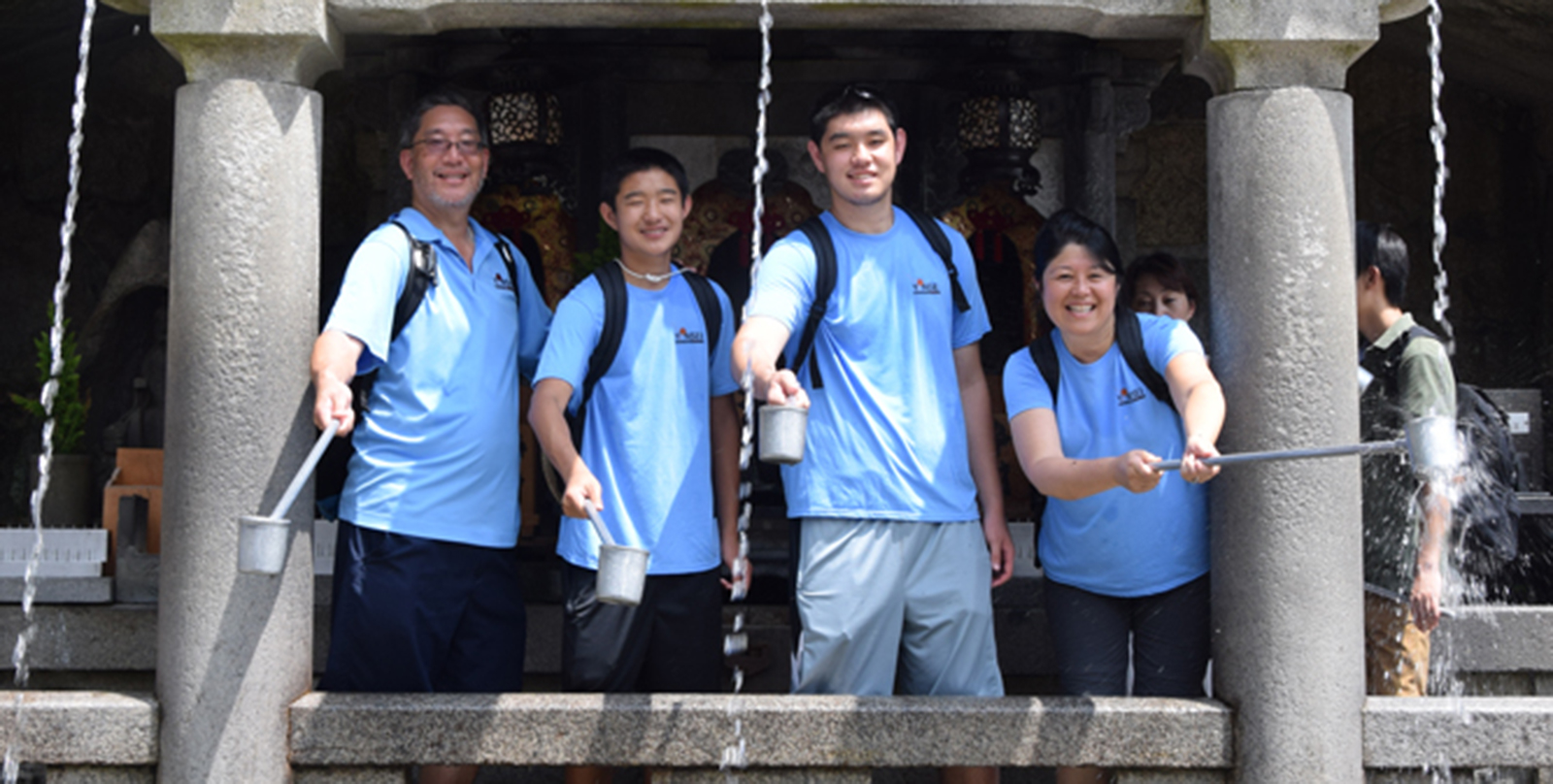 August 3rd marks a long-anticipated date for the Little Tokyo community: the groundbreaking of the Terasaki Budokan, a multi-purpose facility that will be in Little Tokyo. This facility has been in the making for over 40 years and its mission is “to provide a facility in Downtown Los Angeles for youth, families, and seniors that offers sports, community activities, and opportunities to connect visitors to Japanese American culture and to a vibrant, sustainable Little Tokyo.” But the Terasaki Budokan is more than just a facility; for the community, it has been a long-term dream come true - one that will bring people back into Little Tokyo and unite generations.

Like many community accomplishments, there have been many people involved in making the Terasaki Budokan possible. Two of those people are the dynamic father-son team, Alan and Aidan Kosaka. Alan Kosaka serves as the Budokan Capital Campaign Chair and his son, Aidan has volunteered his time to raise awareness and fundraise for the facility. Aidan has also been a participant in Kizuna's own Summer Camp, Leadership, AND Service Learning programs! We had the opportunity to interview the multi-generational team to talk about their involvement, their hopes for the facility, and what the Terasaki Budokan means to them.

Kizuna: First of all, can you two give a brief introduction of yourselves?

Alan:  I'm a hybrid Sansei (Dad is Issei; Mom, Kibei Nisei) raised in Sylmar, CA, and now living in the Orange County with wife Sandi, and sons Austin (20) and Aidan (15). I’m also the Vice President of Engineering for a security company in Torrance.

Aidan: I was born and raised in Orange County. I have enjoyed visiting Little Tokyo ever since I was very young. I am currently a sophomore at Kennedy High School in La Palma and have been playing SEYO basketball for Orange County Optimist (OCO) since I was 5 years old. I am currently part of the Yonsei 23 team, participate in several of the Kizuna programs, and am a charter member of CiTC (Changes in The Community), a giving circle comprised of Japanese American high school students motivated to give back to the Japanese American community.

Kizuna: In your words, please explain what the Terasaki Budokan is and what it means to you.

Alan: I’ve always believed that this project was beyond sports. I wanted kids to really understand the meaning of Little Tokyo, its roots, its history and why it’s an important place to remember. Families weren’t coming to J-town on their own, so it’s our hope that engaging the kids through sports will be a great lead-in to share stories from grandma and grandpa about their history with Little Tokyo. I think everyone from my generation has heard a great story about hamyu at Far East Café, manjyu at Fugestu-do, or their first purchase at Bunkado. We need to continue talking about those positive stories and then continue into a deeper dialogue on the history of immigration and the struggles of discrimination.

Aidan: The Terasaki Budokan is a second chance for the Japanese American community to help stop the gentrification that is currently hurting the businesses, which have been owned by Japanese American families for a long time. Also, it is a place where I can play basketball and hang out.

Kizuna: What do you think the Terasaki Budokan means for your specific generation?

Alan: I give credit to Alan Nishio who said that it was time for us (Sansei- third-generation) to give back. I really didn’t understand that until he detailed how we Sansei have become successful on the coattails of our parents and grandparents and have nothing tangible in Little Tokyo that demonstrates that we gave back. The Issei (first-generation) struggled and persevered (gaman) through discrimination to build Little Tokyo’s foundation. Then the Nisei (second-generation), who fought war-time hysteria and battled through even more discrimination, built what is Little Tokyo today.  As Sansei, we can help build this project to honor those pioneers like Dr. Terasaki, who provided so much to us and continue to further the Japanese American culture through their philanthropy.

Kizuna: How did you become involved with the Terasaki Budokan and the Japanese American community?

Alan: It began in 1998, when I volunteered at Little Tokyo Service Center (LTSC)’s inaugural San Tai San basketball tourney in the streets of Little Tokyo. It was in conjunction with the Japanese American Cultural & Community Center (JACCC) Children’s Day Celebration and watching all the kids shooting hoops gave me the bug. I figured it would be great to see our project to completion. Initially named the Little Tokyo Rec Center, the project costs were around $12 million and we were looking to complete it in five years.  Unfortunately, there were numerous delays within City government and the inability to find a site sidelined us until the City granted us site control in May of 2011.

Kizuna: Alan, we have seen that your family and kids are involved with the project in raising awareness and fundraising, how did they get involved and interested?

Alan: Of course, my kids had no choice when they were young. I dragged them everywhere, and it’s always easy to promote when you have a baby or cute puppy. As they got older though, they realized that dad was on a mission and I think now, they understand the cultural relevance to the project. It didn’t hurt that Jerry West came out to support us, and gave Aidan a one-on-one mentorship on shooting. That was a moment that I will never forget.

Kizuna: Aidan, is there anything that you have learned from your father and his involvement with this project?

Aidan: I learned that this gym is being built for me and the generations that follow me. I hope it will be used as a gathering place for the Japanese American community to meet. My dad taught me to look towards the future, past his or my lifetime, because we want our kids and grandkids to experience the little things, like eating manjyu from Fugetsu-Do and to remember the stories of our past.

Kizuna: What challenges have you had to overcome on making the facility a dream come true?

Alan: Our biggest frustration was finding a suitable location. In the late ‘70s, the project was originally penciled in to be where the current JACCC plaza is today. A designer didn’t want it there, so it took over 40 years of grass roots community effort and the help of then Councilmember Jan Perry to secure our site. It was nearly impossible to solicit donors for a project with no site. But that changed in May of 2011. Our current challenge is to raise the remaining construction costs and then begin a sustainability fund that will ensure the wellbeing for future generations.

Kizuna: Is there anything that you would like the Japanese American community to know about the Terasaki Budokan? How about the larger public?

Alan: I think there’s a misconception that this is just a sports facility. Actually, it’s available for many different activities and events. There’s an outdoor amphitheater to have events outside.

Hmmmm, perhaps to remind them that our project is just that – our project.  Whether you live in Santa Clarita, Oceanside Ventura or Corona, this is our facility. Our campaign slogan was, “A home court for all.” I want everyone to know that we are building this together, and no matter where you live, we want you to visit and enjoy it as one big community. And we’re still not quite finished. We need your help to raise the last of the construction funding.

Aidan: I want the younger Japanese Americans to realize that this is for them, to thank those who have spent more than 40 years of their lifetime to build something for us, to play basketball, and meet somewhere where we can reconnect with our roots. I want others to experience Little Tokyo because Japanese American culture is rich and people need to know about the concentration camps, as well as the 442nd Regiment.

Kizuna: The groundbreaking is coming up very soon (this Thursday, August 3rd) and we’re definitely excited! How do you feel? What do you want people to know about the groundbreaking?

Alan: It’s obviously been a long road since the initial idea first surfaced in the ‘70s. I feel sad for those who championed this in the early days and will not see it come to fruition. For me it’s another motivating factor to ensure that we get this done.

Aidan: I am extremely excited to have somewhere to meet and play because I have grown up playing basketball since I was five years old. Having a place to meet will also bring the community even closer together.

Join us on Thursday, August 3, for the long-anticipated groundbreaking of the Terasaki Budokan. To learn more about the event and the Terasaki Budokan, please visit the website: https://www.terasakibudokan.org/. Thank you to Alan and Aidan for your time and thoughtful responses!